Nearly two years ago, I was sitting nervously in a ballroom at the annual convention of the Funders’ Network, awaiting my turn on stage.

I’d been part of The Moth’s Community Program, and, together with a dozen other participants, we had spent an intense weekend crafting our stories under the guidance of The Moth’s amazing staff.  Now, I would tell my story sandwiched between the grandson of a Holocaust survivor and a woman recounting how she and her children worked their way out of homelessness.  My story —about my mother’s final year and the bond I formed with my nephew—was hardly a pick-me-up, but at that point I wasn’t thinking about the subject matter: I was just terrified.  We’d been rehearsing these stories for days, and now, as we tapped our feet nervously and smiled encouragement at each other, the time had come to perform for a ballroom full of some of the country’s most important philanthropists.

Today, I’m watching from the audience as four Moth storytellers take the stage at SXSW EDU.  They’re from the Moth’s Education Program, and they’ll be opening the conference in a hall so cavernous that most of the audience will only be able to see them on two enormous screens on either side of the stage.  The session is introduced by a sentiment that would be a little scarce through the rest of SXSW EDU: that teachers’ voices should be at the center of the conversation, and that beginning the conference with these stories was intended to set the week off on this note.  The applause for teachers and their voices was resounding, but the applause in response to the question “Who here is a teacher?” was notably sparse.

The stories themselves were breathtaking and commanded the room with their humor, personal details, and human drama.  They shared a powerful theme: that connection with students’ humanity—the sort of connection that transcends academic subject matter and that fuels true teaching and learning—only occurred when teachers themselves exposed their own humanity and vulnerability.  Each storyteller owned the struggle with their own armor and defenses, even as they struggled with the students’ armor and defenses.

He spoke of his first weeks on the job–full of stumbles and uncertainties–and contrasted the confidence he felt on stage as a stand-up comic to the insecurity he felt in the classroom.  After a series of missteps and with nothing left to lose, he came alive on-stage at his school’s teacher talent show, and was able to be the teacher he wanted to be—both confident and vulnerable.

Manley’s stories was hilarious and connected powerfully with the room.  It was followed by the story closest to human tragedy.  When Crystal Duckert confessed that the her husband had voted for McCain in the 2008 election, we joined her in her horror, but we had to quickly backpedal all our contempt when when she told us about his brain tumor.  Hers was a poignant story about how her inability to keep her fears and sadness out of the classroom ultimately made her a better teacher. 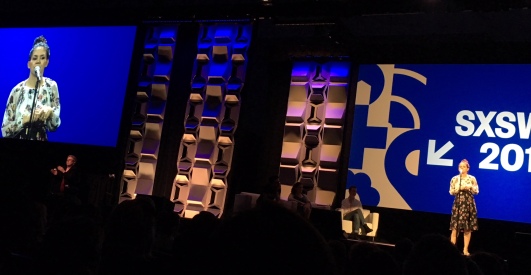 For Duckert, part of bringing herself to the classroom was bringing her “best brown self” there, too, and Chris De La Cruz also hit on the theme that bringing his race into the classroom wasn’t always easy.  When he presented a cutting edge Black Lives Matter assignment like he was “the Dominican Steve Jobs,” a student replied “Yo, why can’t we just write an essay?” Students, it turns out, know when a teacher is working too hard to impress them.

Like the previous storytellers, De La Cruz only succeeded in connecting with the hardest-to-reach student when he “dropped this whole happy teacher thing,” and started opening up about what was really on his mind: his recent break-up.  When his student responded, “Really? I didn’t know you got sad,” he knew he had broken through.

Micaela Blei (@mblei) had been hosting the event up until the end, but transitioned to storyteller for the last story.  I’d seen video of Blei telling this story before—in fact, it was how our community workshop staff showed us how this whole storytelling this was done.  Like that story, the story she told at SXSW EDU was about how big the feelings can be in a child’s classroom experience.  She spoke of an Oregon Trail simulation she ran in her class, and how invested the students became.  It all came to a memorable climax when a student’s Oregon Trail character nearly died, but for the intervention of another student’s character.

The students in Blei’s story displayed a powerful ambivalence about their investment in the project: they wanted it to be dangerous and were clearly attracted to the perils and mishaps along the way; yet they were also vulnerable, and felt real fear, even when the death they confronted was obviously fictional.  It occurred to me how this reflected each of the teacher/storyteller experiences, too: each felt real fear and brought an almost life-and-death drama to their struggles, even as they knew that theirs were completely normal human anxieties.  The drama came in what everyone learned.

All these stories emphasized one of my core beliefs about learning: that it’s reciprocal in its very essence.  For students to be learning, teachers must be learning, too.  For students to change and grow, teachers must be changing and growing, too.  Ultimately, this is the wonder of it all, for who would want to be involved in anything that didn’t offer everyone a chance to learn, change and grow together.